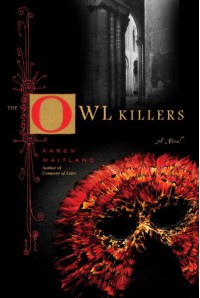 England, 1321. The tiny village of Ulewic teeters between survival and destruction, faith and doubt, God and demons. For shadowing the villagers’ lives are men cloaked in masks and secrecy, ruling with violence, intimidation, and terrifying fiery rites: the Owl Masters.

But another force is touching Ulewic—a newly formed community built and served only by women. Called a beguinage, it is a safe harbor of service and faith in defiance of the all-powerful Church.

Behind the walls of this sanctuary, women have gathered from all walks of life: a skilled physician, a towering former prostitute, a cook, a local convert. But life in Ulewic is growing more dangerous with each passing day. The women are the subject of rumors, envy, scorn, and fury…until the daughter of Ulewic’s most powerful man is cast out of her home and accepted into the beguinage—and battle lines are drawn.

Owls are among my favourite birds, mainly because they were important to my maternal grandmother Matilda and they will always be associated with her in my mind. Anyone who kills an owl is immediately persona non grata to me. My one disappointment with this book was that the followers of the pagan religion in this book turned out to be bad guys, killing owls to warn people that they were next if they didn’t conform and murdering people just as readily. However, in this novel, there is plenty of bad behaviour to go around, no matter which religion a villager adheres to. Religion, whether nature-based or not, is used in this medieval society as a means of social control (as it still is in our century, let’s be honest).

I had no idea there were Beguinages in the Middle Ages—communities built for and by women, to escape the male-dominated church and male-dominated society. In the beguinage, women could still engage with the world, unlike nuns, who were expected to withdraw from worldly pursuits (this is shown starkly by the comparison between Servant Martha and the Anchorite known as Andrew). Women in a beguinage could pursue their own economic interests and intellectual interests with fewer barriers and more personal independence.

The book is full of strong women—from the many Marthas who run the beguinage, to the old witch woman who is feared by all, to the village women who work like horses while raising children, to even the girl-children who are beaten and worked hard, even while half-starved. As Eleanor Roosevelt said, “A woman is like a tea bag; you never know how strong it is until it’s in hot water.” I know that I derive encouragement from the stories of women in my family tree—the circumstances that they endured, the events that they participated in, and the toughness that they exhibited. Although we are gradually emerging from the societal mindset that says that history is made by men, it is important to acknowledge that the men were able to do the historical things only because they had a female support system at home. As a single (straight) working woman, I have often proclaimed that I do not need a husband, but I could sure as heck use a wife! However, my woman’s wages would not support more than one person, so I am stuck doing all the support work as well as the wage-earning—but after reading this book, I shall not be whining too often about this situation.

I also appreciated that medieval life is portrayed as I think it really was: medicine is next to nonexistent, crops fail, natural disasters happen, superstition is rampant, education is only for the rich, and life is difficult for everyone, but especially the average villager. If you escape plague or starvation, you still have to manoeuver through village and church politics. I know that as a teen, I had idealized visions of how people in earlier eras lived and a book like this would have opened my eyes. (There was a time that I believed that I had been born too late—I think I had read too many romantic frontier novels by the likes of Zane Grey—and have since learned more about the experiences of my home-steading grandmothers. I now know very definitely that I am a 21st century woman, through and through).