The Pride of Chanur / C.J. Cherryh 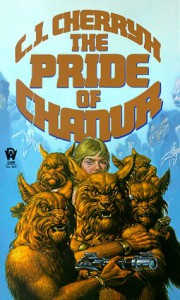 No one at Meetpoint Station had ever seen a creature like the Outsider. Naked-hided, blunt toothed and blunt-fingered, Tully was the sole surviving member of his company -- a communicative, spacefaring species hitherto unknown -- and he was a prisoner of his discoverer/ captors the sadistic, treacherous kif, until his escape onto the hani ship The Pride of Chanur.

Little did he know when he threw himself upon the mercy of The Pride and her crew that he put the entire hani species in jeopardy and imperiled the peace of the Compact itself. For the information this fugitive held could be the ruin or glory of any of the species at Meetpoint Station.

Number 144 on my SFF reading project list.  This was a rollicking good space opera--lots of alien life forms, plots of intrigue, plenty of things going boom!  I don’t know about you, but I can’t exist on a reading diet of only serious, thoughtful books and this provided a fun, relaxing romp through the universe when I needed one.

Cherryh writes aliens well.  I loved the lion people of Anuurn—The Pride of Chanur may have been the name of their vessel, but they are also socially arranged into prides, as are lions.  Just as in lion society, where the females do most of the hunting for the pride, the females of Chanur are sent out to do the important job of trading and bringing home the spoils.  They work in family groups with a lioness at the head of a group which includes nieces and cousins—leaving the unpredictable, impulsive males at home.  Male lions are valuable to lion society as the defenders of territory and cubs, holding land to enable the lionesses to hunt without hazard, both on the savannah and on Anuurn, the Chanur’s home planet.  Just as on the plains of Africa, younger males are always looking to push their way into the leadership position in a pride by defeating older males—this added level of intrigue on Anuurn ups the ante for the Pride’s crew.

I could understand why Tully, the human stowaway, would choose the Anuurnan ship as a potential safe haven—they shared mammalian characteristics and social structures which humans, as primates, are programmed to understand.  I also liked that Tully, although the nucleus around which the book revolved, was really a minor force in the action, putting humanity in its place as a new comer to the Compact and its alliances.  Too often, just as the Catholic church in Galileo’s time, we tend to put humans in a position of central importance and I appreciate it when an author resists that urge.