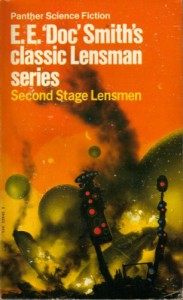 Kim Kinnison, Number One man of his time, had faced challenges before - but rarely one as daunting as this. To him fell the perilous task of infiltrating the inner circle of Boskone, stronghold of galactic civilization's most deadly foe. Kinnison had to become a local Boskonian in every gesture, deed - and thought. He had to work his way up through the ranks of an alien enemy organization, right into the highest echelons of power. Then it would be he who issued the orders - orders that would destroy his own civilization...

If you can ignore the most obviously dated parts of this book, the story will still pull you along.  However, Smith does like to go into the details of space flight as he imagined it and I found myself speed-reading those sections just to get by them.  Not a computer in sight, of course, since this series was written in those misty years before computers became such a part of our society.  I was somewhat disappointed that none of the engineers in this yarn pulled out their trusty sliderules!

What absolutely amazed me was Smith’s depiction of a matriarchal planet—and the degree of vitriol which he put into it!  In previous books, a woman was sent to Arisia to become a Lensman, but was turned down by Mentor or Arisia (letting the aliens be the bigoted ones).  In this one, Kinnison’s fiancée achieves Lensman status, which you would think meant that women were doing okay.  However, while on the planet of the Matriarchs, Kinnison couldn’t be more contemptuous—Smith depicts these women as completely unconcerned with their own appearance.  Free from the male gaze, they are completely ignorant of any form of beauty, even natural beauty such as water falls, rainbows or mountain ranges!  Smith’s depiction of an outraged Kinnison seems extreme.  He says far worse things about these women than he does about the whole Boskonian organization!  Apparently the concept of capable women, who can run a planet just fine, thank you, really flipped a switch in Doc Smith.  Very revealing of the tone of the times.

Worth a read if you are into the historical roots of science fiction or if you are interested (as I am) in the evolving role of women in the genre.