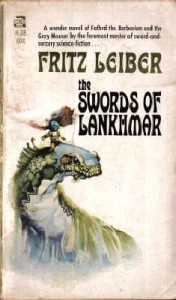 A plague of rats overrun Lankhmar, the capitol city and glittering gem of the land of Nehwon. Commissioned to guard a ship of grain from the cursed rodents, brother-in-arms Fafhrd and the Gray Mouser soon discover the plague has progressed to a fatal point. Mustering the strength of sorcery, they descend into the depths of Lankhmar and rise to battle in order to save the soul of the ill-fated city.


This is certainly not the strongest of Fritz Lieber’s series about Fafhrd and the Gray Mouser, but not a complete stinker.  It would seem in this book that he took the Pied Piper of Hamelin story and reworked it for his two familiar rogues.

Fafhrd and the Mouser get themselves into trouble, as they often do, by returning to Lankhmar broke and attempting to regroup.  They are hired to accompany a marine shipment of grain and are lead astray when they think with their little heads, not with their big heads!  Women have always been a weak spot for these two, but they seem particularly blind in this pursuit in Swords of Lankhmar.  I was actually a bit offended on their behalf—neither Fafhrd nor the Mouser is a great intellect, but they are usually street-smart and highly concerned with their own welfare.  Lieber makes them irresponsibly distracted in this adventure, not really a fair treatment.

Often Lieber’s use of language redeems these novels for me, but I found this version almost devoid of the wonderful vocabulary that I love and instead it is very focused on the tricks of magic spells.  For instance, there is an Alice in Wonderland sequence, complete with potions that increase or decrease size, where the Mouser is plunged into the Rat World.  There is also a strange fixation on hair—a ruler who abhors it and orders all his servants completely shaved, the fur of the rats, and an unusual number of comments on the hairiness of Fafhrd’s chest.  A man/beast distinction, perhaps, with Fafhrd on the edge between the two?

Not as enjoyable as the previous books, but I’m still glad that I read it.