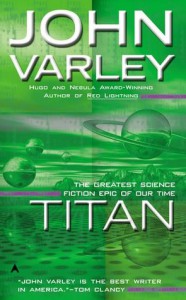 A scientific expedition to the planet Saturn in 2025, aboard the ship Ringmaster, discovers a strange satellite in orbit around the planet. Commanding the ship is Cirocco Jones, a tall NASA career woman, aided by astronomer Gaby Plauget, the clone twin physicists April and August Polo, pilot Eugene Springfield, physician Calvin Greene and engineer Bill (whose last name is never given).

As they reach the satellite they realize it is a huge hollow torus habitat. Before they can report this the ship is entangled in cables from the object. The crew is rendered unconscious and later wake up inside the habitat. Initially separated, Cirroco and Gaby find each other and travel together through the world inside the torus to find the rest of the crew.

As I got started on Titan, I had two thoughts:  this reminds me of Arthur C. Clarke’s 2001, a Space Odyssey as well as Rendezvous with Rama.  A ship from Earth is exploring the outer solar system when they spot something mysterious and as they get closer it is unmistakably an artificial structure.  As they get closer and start to describe it, I thought Ringworld (not one of my favourites).  But Varley manages to distinguish his story from those, even while I think deliberately invoking the comparisons.  He is far and away better at characterization than Clarke or Niven and writes female characters quite well.

I raised an eyebrow when the water seemed to be drinkable and all the berries, animals, etc., seemed to be edible.  How likely is that?  But necessary for the story, I guess (I had the same reaction to C.S. Lewis’ Out of the Silent Planet).

One of the male characters, Bill, is a reader of sci-fi and Cirocco Jones, the main character, is a film buff, so many pop culture references are made to earlier (pre-1979) works.  They are scattered through the work like so many Easter eggs.

Exploration of a new “world” seems to equal self-exploration for Jones, who discovers that maybe she’s not all that into being the Captain, trying to maintain control/discipline, and generally being responsible for everyone.  [I completely understand—I maintain that it’s all I can do to be responsible for myself, I don’t have what it takes to manage employees or parent children].

Although the book starts as if it is going to be a hard science fiction work, it soon turns into a fantasy and commentary on social issues, primarily the relationship between the sexes and the issues of sexuality which some people today are still struggling with, accepting that each person is individual and that there is a sliding scale from heterosexuality to homosexuality, with each person finding their own spot along that continuum.