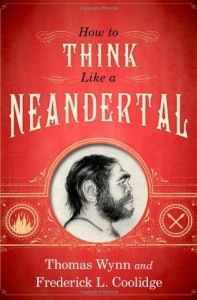 In How to Think Like a Neandertal, archaeologist Thomas Wynn and psychologist Frederick L. Coolidge team up to provide a brilliant account of the mental life of Neandertals, drawing on the most recent fossil and archaeological remains. Indeed, some Neandertal remains are not fossilized, allowing scientists to recover samples of their genes--one specimen had the gene for red hair and, more provocatively, all had a gene called FOXP2, which is thought to be related to speech. Given the differences between their faces and ours, their voices probably sounded a bit different, and the range of consonants and vowels they could generate might have been different. But they could talk, and they had a large (perhaps huge) vocabulary--words for places, routes, techniques, individuals, and emotions. Extensive archaeological remains of stone tools and living sites (and, yes, they did often live in caves) indicate that Neandertals relied on complex technical procedures and spent most of their lives in small family groups. The authors sift the evidence that Neandertals had a symbolic culture--looking at their treatment of corpses, the use of fire, and possible body coloring--and conclude that they probably did not have a sense of the supernatural. The book explores the brutal nature of their lives, especially in northwestern Europe, where men and women with spears hunted together for mammoths and wooly rhinoceroses. They were pain tolerant, very likely taciturn, and not easy to excite.

I remember writing papers on Neandertals for anthropology classes in university in the early 1980s and I am struck by how the same debates still rage in paleoanthropology.  The whole "could Neadertals produce recognizable speech?" debate was on-going when I was a student, with much analysis of hyoid bones and a lot of ink spilt on the topic.

I like the approach of these two authors, taking hard evidence and trying to make reasonable conclusions about the lives of these people.  Like any similar exercise, though, there are probably limits to how accurate they have been and I am sure they would readily concede that.  Still, it is interesting speculation.

I can't help but think that this fascination with another human species says more about us that it does about Neandertals, however.