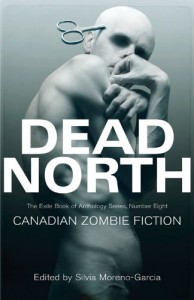 An enjoyable and rollicking ride, this collection contains 20 short stories that explore a broad spectrum of the undead, from Romero-style corpses to zombies inspired by Canadian Aboriginal mythology, all shambling against the background of the Great White North. The anthology's specific focus on Canadian settings distinguishes it from the pack, and its exploration of many types of zombies weaves a vast compendium of fiction. Strong writing and imagination are showcased in clever stories that take readers through thrills, chills, kills, carnage, horror, and havoc wreaked across the country. Tales deal with a lone human chasing zombies across an icy landscape after the apocalypse, whales returning from the depths to haunt the southern coast of Labrador, a marijuana grow-op operation in British Columbia experiencing problems when the dead begin to attack, and a corpse turned into a flesh puppet for part of a depraved sex show, among other topics. Providing a unique location and mythology that has not been tackled before, Dead North will appeal to speculative fiction, horror, and zombie fans.

This was my first foray into zombie fiction and I found it quite enjoyable, once I overcame the creepy factor.  As I have noted before, short stories are not my favourite form of fiction, but I found they worked well for this genre.

There was interesting diversity in this volume--I found it interesting how so many current concerns could be addressed through the zombie!  Environmental concerns (the Tar/Oil sands) feature in one story for example.  Or the dilemma posed when zombies attack your marijuana grow-op--do you call the cops or not?

For some reason, I found the stories based on aboriginal mythology to be the most creepy.  I'm still analyzing why that is so--but they definitely seemed like the scariest ones to tell around a camp fire.

Speculative Fiction Canadian eh? May 2014 Planning to read in 2014