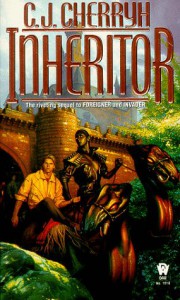 Six months have passed since the reappearance of the starship Phoenix—the same ship which brought a colony of humans to the hostile environment of alien atevi nearly two hundred years ago. During these six months, the atevi have reconfigured their fledgling space program in a bid to take their place in the heavens alongside humans. But the return of the Phoenix has added a frighteningly powerful third party to an already volatile situation, polarizing both human and atevi political factions, and making the possibility of all-out planetary war an even more likely threat.

On the atevi mainland, human ambassador Bren Cameron, in a desperate attempt to maintain the peace, has arranged for one human representative from the Phoenix to take up residence with him in his apartments, and for another to be stationed on Mosphiera, humanity's island enclave. Bren himself is unable to return home for fear of being arrested or assassinated by the powerful arch conservative element who wish to bar the atevi from space. Desperately trying to keep abreast of the atevi associations, how can Bren possibly find a way to save two species from a three-sided conflict that no one can win?

Still very much enjoying this series and C.J. Cherryh’s writing. I love the complexities that she forces her main character, Bren, to deal with. His job is supposed to be translating between humans and atevi on the atevi’s planet. It sounds simple, but there are humans involved here and wherever there are at least three humans (or chimpanzees) there will be politics. So he must deal with human factions and humans are rank amateurs at intrigue compared to the atevi! Add to that mix the long-lost interplantary ship which has returned to look for the humans that it left behind, and the situation becomes even more complex. The atevi believe that a ship full of humans will undoubtedly side with the planet-side humans and have a hard time believing Bren that humans aren’t a monolithic group.

I think Cherryh must have studied colonial histories, perhaps Britain and India or similar patterns, to help her structure a believable narrative. The humans planet-side are so sure of their technological superiority that they get complacent and let their skills slip. They are arrogant because they overestimate their position and under-estimate the skills of the native population, the atevi.

Cherryh certainly knows how to torment a main character. With all the other complexities, she throws in a human ship representative who seems destined to blow a gasket, a burgeoning romantic relationship for Bren, and deteriorating relations with his family. Watching him negotiate this maze of details is fascinating!

Book number 351 in my Science Fiction and Fantasy reading project.