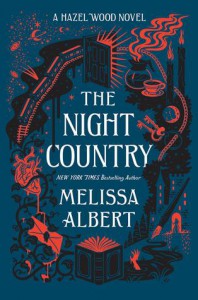 In The Night Country, Alice Proserpine dives back into a menacing, mesmerizing world of dark fairy tales and hidden doors. Follow her and Ellery Finch as they learn The Hazel Wood was just the beginning, and that worlds die not with a whimper, but a bang.

With Finch’s help, Alice escaped the Hinterland and her reclusive grandmother’s dark legacy. Now she and the rest of the dregs of the fairy tale world have washed up in New York City, where Alice is trying to make a new, unmagical life. But something is stalking the Hinterland’s survivors―and she suspects their deaths may have a darker purpose. Meanwhile, in the winking out world of the Hinterland, Finch seeks his own adventure, and―if he can find it―a way back home...

The follow up to The Hazel Wood. I’m still rating this one 4 stars, but it wasn’t quite as enthralling as the initial offering, in my opinion. Some of this may be due to my coming down with the flu as I was finishing up--nothing might have completely pleased me under those conditions.

While I felt like The Hazel Wood was about breaking out of the destructive patterns that hold us in bad places in our lives, The Night Country seems to be about searching for new ways to live after making that escape. It’s not easy and you continually find yourself heading back towards old, familiar patterns of behaviour instead of breaking new ground.

Alice’s mother, Ella, finds herself feeling helpless as she watches her daughter struggle with this whole situation, as generations of parents have done before her. I found myself liking Ella and Alice more than I did in the previous book and being downright fond of Ellery Finch!

Once again, I would caution other readers that although there are fairy tale elements to the story, don’t be expecting handsome princes or entrancing Fae lords. However, if you like these two books of Melissa Albert’s, I would recommend trying An Enchantment of Ravens and Sorcery of Thorns, both by Margaret Rogerson.