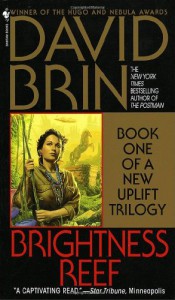 The planet Jijo is forbidden to settlers, its ecology protected by guardians of the Five Galaxies.  But over the centuries it has been resettled, populated by refugees of six intelligent races.  Together they have woven a new society in the wilderness, drawn together by their fear of Judgment Day, when the Five Galaxies will discover their illegal colony.  Then a strange starship arrives on Jijo.  Does it bring the long-dreaded judgment, or worse--a band of criminals willing to destroy the six races of Jijo in order to cover their own crimes?

I enjoyed this adventure in the Uplift universe, even though I had to wonder sometimes just what was going on. In an environment where Uplift is a desirable thing, who would choose to sneak onto a forbidden planet and attempt to divest themselves of all the trappings of permanent civilization? And not just one “sneakship,” but half a dozen different races are on Jijo to “return to Eden.” It’s a regular back-to-the-land movement.

There are a lot of moving parts--plenty of plots and counter-plots, conspiracies, and back stabbing, enough to keep any conspiracy theorist highly entertained. I also enjoyed a lot of the linguistic play. For instance, several species of plants known as Boo. Seeming derived from the word bamboo, Brin gives us greater boo, among others.

With the languages of the alien species, this would be a nasty book to try to read aloud. I pity anyone performing the audio book!

The previous books in the Uplift series were each self-contained stories, but this one leaves many questions unanswered. I’m glad I have the second volume queued up and ready to go.

Book number 335 in my Science Fiction and Fantasy Reading Project.