The Art of Theft / Sherry Thomas 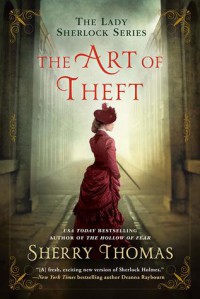 As "Sherlock Holmes, consulting detective," Charlotte Holmes has solved murders and found missing individuals. But she has never stolen a priceless artwork—or rather, made away with the secrets hidden behind a much-coveted canvas.

But Mrs. Watson is desperate to help her old friend recover those secrets and Charlotte finds herself involved in a fever-paced scheme to infiltrate a glamorous Yuletide ball where the painting is one handshake away from being sold and the secrets a bare breath from exposure.

Her dear friend Lord Ingram, her sister Livia, Livia's admirer Stephen Marbleton—everyone pitches in to help and everyone has a grand time. But nothing about this adventure is what it seems and disaster is biding time on the grounds of a glittering French chateau, waiting only for Charlotte to make a single mistake...

One of the best aspects of my 2019 summer reading list (The Summer of Sherlock) was the discovery of this charming series, the Lady Sherlock series. I’m really enjoying a lot of these feminist revisionist Victorian adventures! The Victorian age as it should have been.

I love Charlotte Holmes as a character and I relate to her when she would rather be at home with a cup of tea and a pastry than out in the world pursuing criminals! I rather favour coffee and popcorn, but it’s the same idea. I have to laugh at her concept of Maximum Tolerable Chins, which is the point at which she restricts her pastry consumption until her clothing fits more comfortably. Been there, done that, my dear Charlotte!

My only disappointment with this book was that it did not deal with the Treadles’ plot line until the very last pages! I really want to know what happens between Inspector and his wife, but it seems that I must wait for the next book.

In the meanwhile, I have to applaud the author for being able to bring Charlotte and Lord Ingram together and then separate them so skillfully, retaining the romantic pursuit and it’s accompanying plot tension into the fourth book of the series. Of course I am also interested in the Livia and Stephen Marbleton situation, but it is Charlotte & Ash who command my attention in terms of relationships.

Ms. Thomas also uses the Maharani’s character deftly as a way to explore colonialism and to introduce a person of colour into the very white, upper-class world that the main characters inhabit.

All in all, I will be very excited when Book 5 is published, hopefully next year.