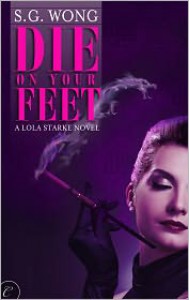 Lola Starke is a PI with a trust fund. Not that she gets everything she wants—or doesn't want. Like being rid of her Ghost, Aubrey O'Connell, for instance. But in Crescent City, Ghosts are commonplace and Hosts are supposed to be happy about it. So Lola's learned to bide her time. It's served her well as a gwai girl raised in a Chinese city.

When two disparate clients won't take 'no' for an answer, Lola reluctantly agrees to both. She and Aubrey are quickly entangled in a murky puzzle of government officials, drug addicts, angry cops, and the gossamer threads of a dangerous plot. Soon enough, the past comes calling with bad news and worse enemies.

This is the '30s and this is Crescent City, where mah-jongg parlours and film studios hold sway. Where the City's highest official is a Ghost with unimpeachable power and a history with Lola's mother. Where secrets last only as long as it takes money to change hands—or a gun to pry them loose.

I read this book to fill the Ghost Stories square of my 2019 Halloween Bingo Card.

I bought this book at the annual writers & readers conference that I attend because I heard the author speak in several sessions that I attended and I was intrigued by her description of her work. Unfortunately, the fit between my tastes and her writing isn’t the best, but it was still a decent read.

Wong has created an interesting world for her characters to inhabit--she doesn’t exactly specify where it is located, but with it’s mash-up of Asian culture, hard-boiled detective, and paranormal elements, we can assume that it is an alternate version of California. She works very hard to make Lola into a female version of Philip Marlowe. The problem is that it’s really difficult to write anywhere near as elegantly as Raymond Chandler, making the comparison of Lola and Marlowe quite unequal.

This seems to be a California that has been dominated by Asian influence, with Christianity and European culture being minority elements. It gives the Caucasian reader of European background a small taste of what it is like to be a minority group, a salutary experience.

Ghosts feature as major characters, but I found them to be much more limited than what I expected. The majority of ghosts are tied to a human host, although the ghostly Mayor of this fictional city has seemingly found a way to stay vital in the world without such tethering. I guess it is realistic that each ghost would have different abilities, just as each person does.