Out of the Deep I Cry / Julia Spencer-Fleming 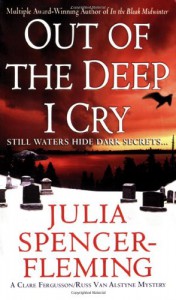 On April 1, 1930, Jonathan Ketchem's wife Jane walked from her house to the police department to ask for help in finding her husband. The men, worn out from a night of chasing bootleggers, did what they could. But no one ever saw Jonathan Ketchem again...

Now decades later, someone else is missing in Miller's Kill, NY. This time it's the physician of the clinic that bears the Ketchem name. Suspicion falls on a volatile single mother with a grudge against the doctor, but Reverend Clare Fergusson isn't convinced. As Clare and Russ investigate, they discover that the doctor's disappearance is linked to a bloody trail going all the way back to the hardscrabble Prohibition era. As they draw ever closer to the truth, their attraction for each other grows increasingly more difficult to resist. And their search threatens to uncover secrets that snake from one generation to the next--and to someone who's ready to kill.

I am really enjoying this series despite the fact that I’m having to use interlibrary loan to get a hold of this one and the next volume. Once I’ve read that one, they’re all available here locally and I can binge read them if I decide to.

I love the use of history here--linking the present to the past in meaningful ways. As a genealogist, I’ve found that a family’s past can sometimes explain current problems. At least in my own family, it has. We can’t easily escape the ties of past events unless we understand what’s going on and make a conscious decision to change things.

The other aspect that really appeals to me is the relationship between Claire and Russ. They are trying so hard to keep it at friendship. Both are honourable people and their reputations are important to them, but it’s becoming obvious in this volume that there is a certain amount of gossip going on regarding the exact nature of their bond. It doesn’t help that fate keeps putting them in positions where they are bound to be tempted. It’s agonizing slow-motion, keeping the tension tight and I’m finding that irresistible!