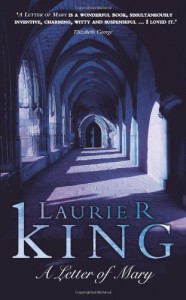 It is 1923. Mary Russell Holmes and her husband, the retired Sherlock Holmes, are enjoying the summer together on their Sussex estate when they are visited by an old friend, Miss Dorothy Ruskin, an archeologist just returned from Palestine. She leaves in their protection an ancient manuscript which seems to hint at the possibility that Mary Magdalene was an apostle--an artifact certain to stir up a storm of biblical proportions in the Christian establishment. When Ruskin is suddenly killed in a tragic accident, Russell and Holmes find themselves on the trail of a fiendishly clever murderer. Brimming with political intrigue, theological arcana, and brilliant Holmesian deductions.

Whatever I may think of the whole Sherlock Holmes/Mary Russell relationship hook that King has used as the basis for this series, she is a masterful writer of the mystery genre in my opinion. I am perhaps biased, as I thoroughly enjoyed my time as a university student and studied three courses in Ancient Greek as well as a fair bit of Classical history (mostly influenced by H. Rider Haggard’s She: A History of Adventure, I confess) and during that period I was severely tempted by Biblical historicity and documents such as the Dead Sea Scrolls--I can envision myself being just as immersed in theological studies as Mary Russell.

Since reading the first two Theodora Goss novels (The Strange Case of the Alchemist's Daughter and European Travel for the Monstrous Gentlewoman), I am also developing an affection for cross-pollination between fictional works and King provides that in several examples. I was amused when Mary returned from a research day in Oxford, mentioning that she had met a man named Tolkien who was involved in runes, mythology and linguistics.

But the pièce de résistance was an encounter by Mary during an “undercover” adventure with Lord Peter Wimsey! He is never directly identified, but she does call him Pete and his behaviour is unmistakable. She has just been diverted from the buffet by the presence of two women who will unwittingly unmask her and has wandered back to a music room to contemplate her options. There she discovers Wimsey improvising “a three-way hybrid of Schubert’s “March Militaire” performed as a Goldberg Variation by Bach with Scott Joplin occasionally elbowing in,” based on Yes, We Have No Bananas. Mary enjoys watching him, “witnessing one of nature’s rare creatures in its own habitat.”

He screwed his monocle into place with a gesture of buckling on armour, then glided smoothly out into the crowd. I watched with amusement as he greeted his hostess, kissed the fingers of a matched brace of dowagers, shook various hands, greeted the colonel and said something that made him laugh, scooped up three glasses of champagne from a passing tray, and finally, with the ease of a champion sheepdog, cut out his two victims from the flock. Within four minutes from leaving my side, he was strolling down the terrace stones, one fluttering female on each arm, and I stepped out to take a plate. Rule, Britannia, with an aristocracy like that.

King, to my way of thinking, has perfectly nailed the spirit of Dorothy Sayers in this vignette. It made me ridiculously happy. It’s the sheepdog reference that cinched it for me--that is Sayers to the nth degree.

My Summer of Sherlock is drawing to a close, but I am sure that I will continue reading this series for some time to come.