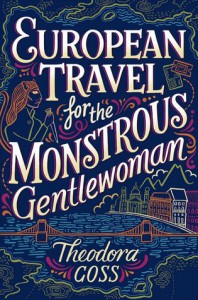 Mary Jekyll’s life has been peaceful since she helped Sherlock Holmes and Dr. Watson solve the Whitechapel Murders. Beatrice Rappaccini, Catherine Moreau, Justine Frankenstein, and Mary’s sister Diana Hyde have settled into the Jekyll household in London, and although they sometimes quarrel, the members of the Athena Club get along as well as any five young women with very different personalities. At least they can always rely on Mrs. Poole.

But when Mary receives a telegram that Lucinda Van Helsing has been kidnapped, the Athena Club must travel to the Austro-Hungarian Empire to rescue yet another young woman who has been subjected to horrific experimentation. Where is Lucinda, and what has Professor Van Helsing been doing to his daughter? Can Mary, Diana, Beatrice, and Justine reach her in time?

Racing against the clock to save Lucinda from certain doom, the Athena Club embarks on a madcap journey across Europe. From Paris to Vienna to Budapest, Mary and her friends must make new allies, face old enemies, and finally confront the fearsome, secretive Alchemical Society. It’s time for these monstrous gentlewomen to overcome the past and create their own destinies.

The second book of this series is every bit as delightful as the first one was. This is the continuing adventure of Mary Jekyll, Diana Hyde, Justine Frankenstein, Catherine Moreau, and Beatrice Rappaccini. The delight, for me, came with all the late Victorian references that the author throws into the salad. I’m starting to wonder which ones I overlooked out of sheer ignorance of the literature of the time period.

Needless to say, since She: A History of Adventure is one of my all time favourite books, I was thrilled when Ayesha, Leo Vincey, and Horace Holly made their appearances. Of course, the men need to be taken down a peg or two, as Goss is very determinedly puncturing the inflated egos of the men of the era.

Of course, the Athena Club (consisting of our main female characters) is bent on rescuing Lucinda Van Helsing, another young woman being experimented on my her hubristic scientist father. This firmly connects the Dracula novel to this story line, as was begun in the first volume. Also expect to see Le Fanu’s Carmilla and historic figures such as Sigmund Freud.

Sherlock Holmes and Dr. Watson appear at the beginning of this story, but are rapidly left behind when the action moves to the continent. I’ll put money on them being more involved in the third novel, which comes out this October. I for one will be looking for it and I’m considering adding more late Victorian literature to my reading docket so as to be better able to recognize the references that Ms. Goss throws into her fiction.