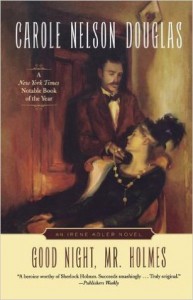 Miss Irene Adler, the beautiful American opera singer who once outwitted Sherlock Holmes, is here given an unexpected talent: she is a superb detective, as Oscar Wilde and Bram Stoker can attest. Even Holmes himself must admit--albeit grudgingly--that she acquits herself competently.

But in matters of the heart she encounters difficulty. The Crown Prince of Bohemia--tall, blonde, and handsome--proves to be a cad. Will dashing barrister Godfrey Norton be able to convince Irene that not all handsome men are cut from the same broadcloth?


I must confess that I went into this mystery not expecting very much and I was pleasantly surprised. I checked out the author’s biography after finishing this novel and found that she has published over 60 books, so I guess that I shouldn’t have been as shocked as I was. This was a decent mystery story, but I have to ask myself why someone who can write this well feels it necessary to include the Irene Adler/Sherlock Holmes aspect to their novel?? Ms. Nelson Douglas must be a true fan of the Holmes stories.

Once again, we have a modern female author taking a female character that Conan Doyle didn’t spend much time on, and giving her her own backstory and fleshing out her motivations. I can definitely see why Irene Adler (“the woman”) would be a tempting target for this treatment.

However, I found my sympathies lying much more with Penelope Huxtaible, Irene’s room-mate and partner in investigation. Nell, as Irene calls her, is an impoverished orphaned parson’s daughter and reminded me strongly of Jane Eyre, with her ideas of propriety and morality. She very much fills a John Watson-like role, recording Irene’s adventures. I know enough Sherlock Holmes lore to realize that Irene would end up married to Godfrey Norton, but I couldn’t help, in this version, wishing that he would choose Penelope instead. Sadly, the author stuck to the canon in this regard.

I loved Irene’s and Nell’s independent ways--supporting themselves quite well and avoiding dependence upon men in the beginning. Godfrey ruins them both by being a wonderful employer to Nell and eventually husband to Irene. In between, Irene has her fling with the Crown Prince of Bohemia and Nell provides the description of the relationship’s ending. Despite knowing how things would turn out, it was a tense, exciting portion of the book.

Opinion seems to be all over the map on this one, but I found that the author managed to insert enough novelty into an old story to make it enjoyable.