In an Absent Dream / Seanan McGuire 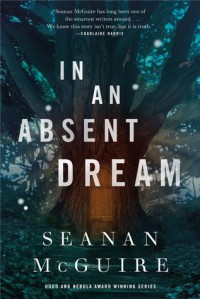 This fourth entry and prequel tells the story of Lundy, a very serious young girl who would rather study and dream than become a respectable housewife and live up to the expectations of the world around her. As well she should.

When she finds a doorway to a world founded on logic and reason, riddles and lies, she thinks she's found her paradise. Alas, everything costs at the goblin market, and when her time there is drawing to a close, she makes the kind of bargain that never plays out well.

It’s been a long time since I read Lewis Carroll’s Alice and I’m still gradually working my way through C.S. Lewis’ Narnia series. Both are good portal fantasy in their way, but I’m truly loving the Wayward Children series. I’m also appreciating that there are some echoes ofMiss Peregrine's Home for Peculiar Children in the form of Eleanor West’s Home for Wayward Children.

I’m particularly fond of this volume of Wayward Children, as McGuire explores the nature of the societies that we live in. What is fairness? Do you have to choose between friends and family? Should you have to? What are the unspoken assumptions that govern our lives?

This tale makes particularly good use of the poem Goblin Market by Christina Rossetti. McGuire has skillfully woven many details from that lovely work into her own tale. “There is no friend like a sister” states the poem and Lundy, separated from her sister by a magical doorway, must decide whether to stay with her friend Moon beyond the magic door or to live with her sister in what we would call reality.

I identified with Lundy in several ways--being more interested in books than in classmates, being unhappy with being treated second-class to boys, and being anxious to move away from home and live life on my own terms. Lundy finds the Goblin Market world, where if one doesn’t deal fairly with others, the consequences show up on the body. Everyone in this world believes in the fairness of the deal, rather in the same way that our system of capitalism “believes” in the fairness of the “free market.” Lundy’s father eventually points out to her that the Goblin Market may not be a fair as she assumed as a young child.

A very short, sweet book, well worth the reader’s time. I hope it will become as classic as Alice, Narnia and Oz.