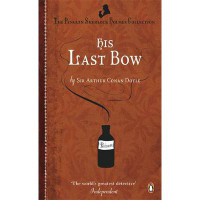 Sherlock Holmes's fearless chronicler Dr Watson once again opens his notebooks to bring to light eight further tales of some of the strangest and most fascinating cases to come before the enquiring mind of London's most famous detective.

These mysteries involve the disappearance of secret plans as well as of a lady of noble standing; the curious circumstances of Wisteria Lodge and of the Devil's Foot; as well as the story His Last Bow, the last outing of Holmes and Watson on the eve of the First World War.

I believe that I have now read all of Conan Doyle’s Sherlock Holmes stories. Plus I have read a lot of fiction that uses his great detective as a character--largely novels. I am truly impressed with Doyle’s skill--he manages to give such detail and delight in the short story format. We come away from his fiction feeling like we know all about Mr. Holmes and like John Watson would be our friend if we ran into him. No wonder people show up at their iconic address in London, as if expecting the famous duo to still be there.

In this collection, we get a better sense of Mycroft Holmes and his importance to the government. One wonders what he would think of Boris Johnson and Brexit. No doubt both brothers would have opinions on the matter! Whether they would share those opinions is another question.

I’m glad to have read the entire Holmes canon and now I think I may turn my attention to a biography of Arthur Conan Doyle and some of his other fiction.