The Last of August / Brittany Cavallaro 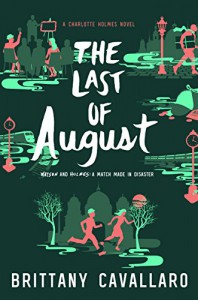 Jamie Watson and Charlotte Holmes are looking for a winter-break reprieve after a fall semester that almost got them killed. But Charlotte isn’t the only Holmes with secrets, and the mood at her family’s Sussex estate is palpably tense. On top of everything else, Holmes and Watson could be becoming morethan friends—but still, the darkness in Charlotte’s past is a wall between them.

A distraction arises soon enough, because Charlotte’s beloved uncle Leander goes missing from the estate—after being oddly private about his latest assignment in a German art forgery ring. The game is afoot once again, and Charlotte is single-minded in her pursuit.

Their first stop? Berlin. Their first contact? August Moriarty (formerly Charlotte’s obsession, currently believed by most to be dead), whose powerful family has been ripping off famous paintings for the last hundred years. But as they follow the gritty underground scene in Berlin to glittering art houses in Prague, Holmes and Watson begin to realize that this is a much more complicated case than a disappearance. Much more dangerous, too.

What they learn might change everything they know about their families, themselves, and each other.

The next logical step from where A Study in Charlotte left off. Jamie and Charlotte (Watson and Holmes) alternate between bickering and huddling together for comfort. Mostly under the watchful eye of August Moriarty, who is officially dead and unofficially working for Charlotte’s brother, Milo.

If I was a high school student who longed to be treated like an adult, this would be the book for me. As it is, I am well over 50 and found it to be a trifle over-the-top for my tastes. Rather like many of the spy thrillers that I read last year during my Summer of Spies. How else would teens end up chartering helicopters and booking hotels in Berlin?

Jamie Watson retains his great-grandfather’s role as the chronicler, but seems to get beaten up a little more frequently than that medical gentleman. August has been trying, unsuccessfully, to patch up the rift between the Holmes and Moriarty families. I had erroneously supposed there was only one more book--is it bad that I was dismayed to find two of them? I’m unsure whether I will finish the series this summer. There’s an awful lot of Sherlock Holmes pastiche out there and I would prefer to sample other writers rather than finish up this series.