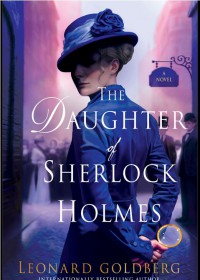 1910. Joanna Blalock unknowingly is the product of a sole assignation between the late Sherlock Holmes and Irene Adler. After the nurse and her ten-year-old son see a man fall to his death in an apparent suicide, elderly Dr. John Watson and his charming handsome son Dr. John Watson Jr. invite her to join their detective team. From hidden treasure to the Second Afghan War of 1878-1880, the group devise an ingenious plan to catch a murderer in the act while dodging Scotland Yard the British aristocracy.

I am quite amazed at the sheer number of authors who can’t resist writing about the great detective! In this offering, it is a male author, giving us his version of a daughter of Sherlock Holmes.

I rather like the enhanced role it gives to Dr. Watson, the surviving member of the duo. He and his dashing son, also a doctor, set about solving a mystery which Joanna Blalock has witnessed. She is soon part of the investigative team and very much on Watson Junior’s mind.

The story is a bit on the predictable side. There is a cunning criminal, a Lestrade Junior as a foil for the Watson team, a developing romance between Joanna & John Junior, and a plot line very reminiscent of The Sign of the Four.

There are two more books in the series, both of which are available through my public library. However, I am in no rush to get them--there are so many other Holmes pastiche books to be sampled during my summer project and I found this one a bit on the dry side.