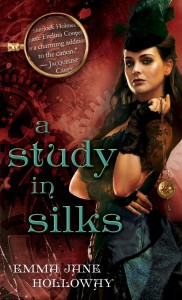 London, April 4, 1888 ~ Evelina Cooper, niece of Sherlock Holmes, is ready for her first London Season - except for a murderer, missing automatons, a sorcerer, and a talking mouse. In a Victorian era ruled by a ruthless steam baron council, mechanical power is the real monarch, and sorcery the demon enemy of the empire. Evelina has secretly mastered a coveted weapon - magic that can run machines. Should she trust the handsome, clever rake who speeds her breath, or the dashing trick rider who would dare anything she would ask?

A very steampunk story, with an indirect connection to Sherlock Holmes. The author gives the great detective a sister, who has produced this niece before dying. The niece has been retrieved from her father’s side of the family, a circus family. That’s as in trapezes, not in family hysterics!

So it’s way out there, Holmes-wise. I can’t help but think that the author could have made up a famous detective of her own to fill in for the detective uncle and the story would have been just as good. However, it does tie into a late Holmes story, The Problem of Thor Bridge. This is obviously where Holloway got her inspiration for the Gold King, and the various steambarons who divide London up between them with their monopolistic business ventures.

There are clockwork devices and occasional magic, not at all the usual stuff of Sherlock Holmes stories, but it was a fun little romp and I’m looking forward to the next book. Our heroine, Evelina Cooper, will undoubtedly have to choose between her two men, circus performer Nick and blue blood Tobias. Having burned bridges with both of them in this volume, it will be interesting to see how the author ropes them back in during the next book.

I would warn away the Sherlock Holmes purists from this series, but if you are into Steampunk paranormal romances, A Study in Silks is pretty decent.