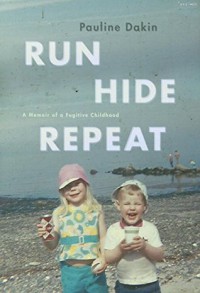 Pauline Dakin spent her childhood on the run. Without warning, her mother twice uprooted her and her brother, moving thousands of miles away from family and friends. Disturbing events interrupt their outwardly normal life: break-ins, car thefts, even physical attacks on a family friend. Many years later, her mother finally revealed they'd been running from the Mafia and were receiving protection from a covert anti-organized crime task force.
But the truth was even more bizarre. Gradually, Dakin's fears give way to suspicion. She puts her journalistic training to work and discovers that the Mafia threat was actually an elaborate web of lies.  As she revisits her past, Dakin uncovers the human capacity for betrayal and deception, and the power of love to forgive.
Run, Hide, Repeat is a memoir of a childhood steeped in unexplained fear and menace. Gripping and suspenseful, it moves from Dakin's uneasy acceptance of her family's dire situation to bewildered anger. As compelling and twisted as a thriller, Run Hide Repeat is an unforgettable portrait of a family under threat, and the resilience of family bonds.

Sometimes, when I read memoirs, I have to wonder what motivated the author to share a slice of their life in book form. With this volume, I have no doubt what the author’s motivation was--this is easiest way to explain the weirdness of her life to the people that she has encountered along her journey.

What if the major assumptions of your life, ones that determined major things like where you lived and who you associated with, were based on someone else’s delusion? This is what Pauline Dakin describes in this fascinating memoir of life on the run with her mother and the man that they all trusted.

Dakin is a journalist, having worked for the CBC as a medical and health reporter. She is now an instructor, teaching future journalists. With this background, it is no surprise that this is a well-written account and it is obvious that she has spent a lot of time reflecting on her experiences and trying to make sense of all that happened during her childhood and young adulthood.

I heard her interviewed on CBC radio, which put this book on my radar. I’m a sucker for memoirs, enjoying being a voyeur into someone else’s existence I guess. I’m surprised that the author’s husband and her brother’s wife were drawn into the whole delusion for as long as they were, but their spouses had been involved since childhood & were predisposed to believe Stan Sears and his complicated delusional assumptions about the world.

If nothing else, Dakin has given Delusional Disorder a little more exposure, which may be a help to others who are attached to someone with these issues.