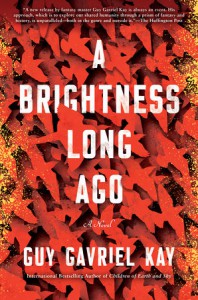 In a chamber overlooking the nighttime waterways of a maritime city, a man looks back on his youth and the people who shaped his life. Danio Cerra's intelligence won him entry to a renowned school even though he was only the son of a tailor. He took service at the court of a ruling count--and soon learned why that man was known  as the Beast.

Danio's fate changed the moment he saw and recognized Adria Ripoli as she entered the count's chambers one autumn night--intending to kill. Born to power, Adria had chosen, instead of a life of comfort, one of danger--and freedom. Which is how she encounters Danio in a perilous time and place.

Vivid figures share the unfolding story. Among them: a healer determined to defy her expected lot; a charming, frivolous son of immense wealth; a powerful religious leader more decadent than devout; and, affecting all these lives and many more,  two larger-than-life mercenary commanders, lifelong adversaries, whose rivalry puts a world in the balance.

As usual, GGK writes like a dream. If you like historical fantasy, I would highly recommend his work. This volume features a world very much like Renaissance Italy, with all its political machinations and complications.

But what I absolutely adore is Kay’s portrayals of women. They have exactly the same depth, the same complexity, the same motivations as the male characters. In other words, he treats women as equal people. It is such a delight to read fiction written to depict real women!

I was especially fond of Adria Ripoli (with her desire for a more independent existence and the freedom to ride in a horse race) and Jelena, the healer who rejects a traditional female life to pursue her calling and her interests. Because there must have been women during every time in history who weren’t willing to be relegated to being solely wives, mothers, or nuns.

But there is also Ginevra della Valle, a woman who has chosen the traditional route to female fulfillment and succeeded. She began as a powerful mercenary’s mistress and has progressed to being his wife and mother of two sons. But there is absolutely no doubt in anyone’s mind that she is a power unto herself.

I cannot recommend Kay’s writing too strongly. I haven’t read his entire canon yet, but I have been delighted by everything that I have consumed so far.