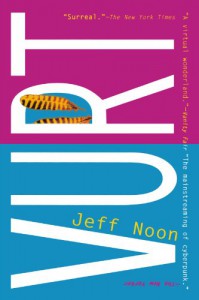 Vurt is a feather--a drug, a dimension, a dream state, a virtual reality. It comes in many colors: legal Blues for lullaby dreams. Blacks, filled with tenderness and pain, just beyond the law. Pink Pornovurts, doorways to bliss. Silver feathers for techies who know how to remix colors and open new dimensions. And Yellows--the feathers from which there is no escape.

The beautiful young Desdemona is trapped in Curious Yellow, the ultimate Metavurt, a feather few have ever seen and fewer still have dared ingest. Her brother Scribble will risk everything to rescue his beloved sister. Helped by his gang, the Stash Riders, hindered by shadowcops, robos, rock and roll dogmen, and his own dread, Scribble searches along the edges of civilization for a feather that, if it exists at all, must be bought with the one thing no sane person would willingly give.

Well, if most cyberpunk were more like this, I would be more enthusiastic about it. This was fun. And it reminded me of so many other books that I have read during my Science Fiction & Fantasy project. Like A Clockwork Orange, oh my brothers! I also kept thinking about Gravity's Rainbow, just because of the way things flowed and characters entered and exited, only to return at odd moments. But mostly, it was like going Through the Looking Glass with Alice, where Alice is actually Philip K. Dick. I absolutely loved it when Scribb showed up at a club called the Slivey Tove and there was a White Rabbit doorman. That was when my Lewis Carroll suspicions were confirmed. And the dogmen made me think of The Island of Doctor Moreau (and in Ben Aaronovitch’s Peter Grant series, what they called the Stripclub of Dr Moreau).

The layers of reality were both confusing and intriguing--just trying to keep track of where Scribb was could be challenging. (Just like the Queen of Hearts said, you have to run as fast as you can just to stay in one place).

I haven’t had much luck locating the other two volumes (Pollen andAutomated Alice), but I intend to keep searching for them.

Book 315 in my Science Fiction and Fantasy Reading Project.