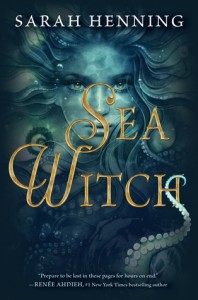 Everyone knows what happens in the end. A mermaid, a prince, a true love’s kiss. But before that young siren’s tale, there were three friends. One feared, one royal, and one already dead.

Ever since her best friend, Anna, drowned, Evie has been an outcast in her small fishing town. A freak. A curse. A witch.

A girl with an uncanny resemblance to Anna appears offshore and, though the girl denies it, Evie is convinced that her best friend actually survived. That her own magic wasn’t so powerless after all. And, as the two girls catch the eyes—and hearts—of two charming princes, Evie believes that she might finally have a chance at her own happily ever after.

But her new friend has secrets of her own. She can’t stay in Havnestad, or on two legs, unless Evie finds a way to help her. Now Evie will do anything to save her friend’s humanity, along with her prince’s heart—harnessing the power of her magic, her ocean, and her love until she discovers, too late, the truth of her bargain.

Make sure you have familiarized yourself with Hans Christian Andersen’s version of The Little Mermaid before you read Sea Witch. This is a prequel, telling the story of how the Sea Witch came to exist.

She’s Evie, not Ursula, in this version and she’s far more complex than a Disney villain. We meet her as a young woman, learning her place in the world and trying to cover up her magical leanings in a society where it isn’t welcome. Evie’s neighbours have noticed her close friendship with their Crown Prince Nicholas--there is both jealousy and a desire to put her in her (much lower) place. Like any good fairy story, there are complex issues at play.

It is also a story about personal relationships--how much do we actually know about the people around us, those whom we consider to be friends? If they aren’t true friends, how much damage can they do to us? How much do we manipulate and allow others to manipulate us?

A very well written embroidery on the original Andersen tale. Read as part of my 2019 MerMay project.