Into the Drowning Deep / Mira Grant 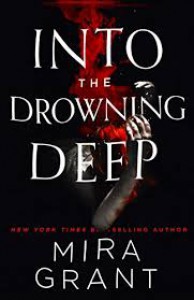 Seven years ago, the Atargatis set off on a voyage to the Mariana Trench to film a “mockumentary” bringing to life ancient sea creatures of legend. It was lost at sea with all hands. Some have called it a hoax; others have called it a maritime tragedy.

Now, a new crew has been assembled. But this time they’re not out to entertain. Some seek to validate their life’s work. Some seek the greatest hunt of all. Some seek the truth. But for the ambitious young scientist Victoria Stewart this is a voyage to uncover the fate of the sister she lost.

Whatever the truth may be, it will only be found below the waves. But the secrets of the deep come with a price.

I’ve rated this book highly for a horror novel--they’re not usually my jam. But I know that Mira Grant is a pseudonym for one of my favourite authors, Seanan McGuire, and I also knew going in that it featured mermaids. I hadn’t realized quite how loomingly horrific it would be, nor how much blood & gore would be splashed about. However, the messiness of the action was justified by the nature of the mermaids and, although I had to read during daylight hours only, I enjoyed the mysterious creatures and their almost-victims.

I enjoyed the scientific nature of this sea excursion--plenty of scientists who didn’t believe in the existence of mermaids, but were willing to go along to pursue their own research. Everyone with their own scientific or political axe to grind, trying to use the expedition to their advantage. Somehow, everyone manages to overlook the fact that the first ship sent was discovered, empty of humans, but with horrific video footage. Of course, the video is deemed to be fiction or a hoax, and even those who believe what they saw are somehow talked into coming along on this venture.

I thought that the name of the deep sea rover, The Minnow, was fabulous--evoking Gilligan’s Island, with the lost ship, being stranded, and having to improvise. The notion that a 3 hour tour would turn into a life-changing event.

These mermaids are very different from those in McGuire’s October Daye series, where they are a branch of the Fae. Here they are terrifying predators, spreading fear and death throughout the ship.