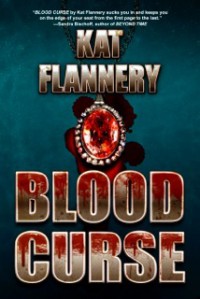 Four years after the Blood Curse, Pril of the Peddlers vows to protect her child against the evil men who hunt her. With her clan unaware of the branded girl among them, Pril has to keep the identity of her daughter a secret. When her child is kidnapped, she is forced to ask Merchant runner, Kade Walker, for his help.
Kade Walker needs to find the gypsy child. Blackmailed and pushed beyond his own moral code, he is determined to do whatever it takes. When he comes across the Peddler clan, he is sure the girl is there, however all hope is lost when the gypsies capture him. Time is running out-until Pril makes him an offer he cannot refuse.
Amidst greed, lust, revenge and love, Pril will need to trust Kade. But as the evil nears and doubt creeps in, will she discover that the enemy has been standing next to her all along?

I chose this book because the author is coming to a conference that I’m attending in August. I like to have some idea what the keynote authors have to offer, so that I know which panels and discussions that I want to attend.

I had to order this book on interlibrary loan--my public library doesn’t have anything by this author. On the basis of this book, I’d have to say that they’ve made the right decision. Not that the ideas were bad, they weren’t. But the expression of them wasn’t what I would expect. In fact, I was disappointed.

The first pages were confusing, as the action went too fast for the exposition. It all figured itself out in subsequent pages, but it was an inauspicious beginning. Add to that some clumsy sentence structures, where I was sure which pronoun referred to which person, and some questionable word choices--I’m sure in one sentence the author meant “condescension” but instead “condensation” was printed. Also, on several occasions, the men are described as having “meaty fists.” Now, I know what that means, but I think there are many words that would describe large, powerful hands better than that. It was (thankfully) not a long book, but it made the entire story feel rushed, which may be why so many plot points were telegraphed very early in the narrative, leaving little for the reader to discover or be surprised by.

All in all, I’m glad that I read the book--I now know the author’s level of skill and it took me only a partial evening to finish the volume. I’m truly sorry that I didn’t enjoy the novel more, but I will see what the author has to say in her keynote address, but I imagine that I’ll be spending my conference time listening to others.