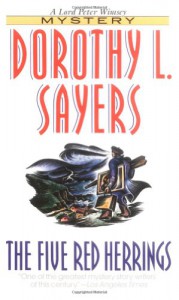 The body was on the pointed rocks alongside the stream. The artist might have fallen from the cliff where he was painting, but there are too many suspicious elements - particularly the medical evidence that proves he'd been dead nearly half a day, though eyewitnesses had seen him alive a scant hour earlier. And then there are the six prime suspects - all of them artists, all of whom wished him dead. Five are red herrings, but one has created a masterpiece of murder that baffles everyone, including Lord Peter Wimsey.

Give this volume about 3.5 stars, I think. For me, it has been the least enjoyable installment of Lord Peter Wimsey. And still, it had its great moments. Dorothy Sayers is the only author that I have read who had produced Scots dialog on the page that hasn’t annoyed me to death! I found it was effective and even a bit humorous from time to time.

Where this book fell down for me was the intricacy of the clues. I know that Sayers prided herself on not “cheating,” giving the reader all the clues that they needed to solve the mystery right along with Wimsey (see Dorothy L. Sayers: Her Life and Soul by Barbara Reynolds). However, I would have needed to make myself a detailed flow chart if I was going to solve this mystery! So I just drifted with the flow of her writing and enjoyed other details along the way.

The last few pages, including the re-enactment of the crime, were absolutely the best part of the book. I don’t usually laugh out loud when I’m reading, but I know for a fact that I produced several outbursts as I enjoyed this production! Well worth enduring all the train time tables!