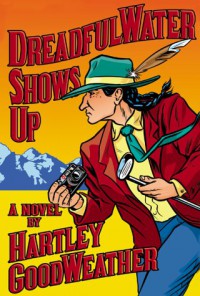 With his cop life officially behind him, Thumps now makes his living as a fine-arts photographer in Chinook  a western town snuggled up against a reservation that's struggling for economic independence via investment in a glitzy new resort and casino complex called Buffalo Mountain. It's a slow-paced, good life for Thumps and his eccentric cat, Freeway. Most of the time. But when a dead body turns up in one of the just-completed luxury condos, things change fast  and not for the better. Photographing corpses is not part of Thumps's master plan.

A delightful mystery, written by one of my favourite writers, Thomas King, under his silly pseudonym Hartley GoodWeather. He was obviously having fun with this mystery novel and indulging his wonderful sense of humour. But King just seems to write gorgeously under any circumstances and this story was a wonderful way to spend a Friday evening after what felt like an interminable week at work.

Thumps DreadfulWater is a non-detective, or so he keeps saying. A former policeman who couldn’t solve a murder that impacted him personally, he has moved into a small town in the North West States (it’s not clear yet exactly where Chinook is located, although that name would hint that it’s east of the Rockies) and he has switched professions, becoming a photographer.

I heard King interviewed on radio about Thumps’ name—Mr. King apparently subscribed to a magazine by phone and spelled his name carefully. When he received the first issue, it was addressed to Thumps King, so he concluded that the person who took his information had pretty poor handwriting, to turn Thomas into Thumps. However, it was too good a name to just let go of.

I read the whole thing in one evening and it was just the antidote to a stressful week. I’ve already put a hold on the next book in the series (and I’m not the only one, I am number 20 in line for 3 copies, so it will be a while). I’m also glad to hear that Mr. King has plans to write further adventures of Thumps DreadfulWater and I look forward to reading them all!