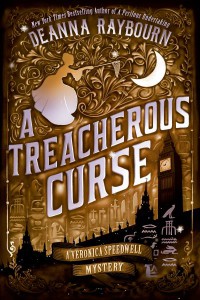 London, 1888. As colorful and unfettered as the butterflies she collects, Victorian adventuress Veronica Speedwell can’t resist the allure of an exotic mystery—particularly one involving her enigmatic colleague, Stoker.

His former expedition partner has vanished from an archaeological dig with a priceless diadem unearthed from the newly discovered tomb of an Egyptian princess. This disappearance is just the latest in a string of unfortunate events that have plagued the controversial expedition, and rumors abound that the curse of the vengeful princess has been unleashed as the shadowy figure of Anubis himself stalks the streets of London.

But the perils of an ancient curse are not the only challenges Veronica must face as sordid details and malevolent enemies emerge from Stoker’s past.

Caught in a tangle of conspiracies and threats—and thrust into the public eye by an enterprising new foe—Veronica must separate facts from fantasy to unravel a web of duplicity that threatens to cost Stoker everything. . .

I do love sassy, sarcastic Veronica Speedwell! I am caught up now and ready to enjoy the next book in the series, which is due out in March 2019. (Next month! Squee!)

I adore Raybourn’s writing and the particular voice that she has established for Veronica. For example:

“Boys!” I said sharply. “There will be no brawling with your shirts on. Kindly remove your upper garments and give them into my keeping.” Both men turned to look at me, wearing identical expressions of astonishment. Mornaday spoke first. “I beg your pardon?” I adopted my best nanny tone—one that I had used with excellent results to bring unruly suitors to heel. “You cannot strike an opponent properly while hampered by a tight coat,” I pointed out. “Or a fitted waistcoat. And white does show the blood so badly. The shirt must come off as well.” I put out my hands. “Come on, then. Shirts off, both of you. Shall you fight to first blood or unconsciousness? I always think first blood is a little lacking. Let’s go until one of you is entirely senseless, shall we?”

Needless to say that the “boys,” Stoker and Moraday, think better of their impulse to beat on one another.

I’m also enjoying the slow progression of the friendship between Veronica and Stoker—we get the distinct impression that Raybourn will bring them together eventually, but she realizes that would change the chemistry of the books substantially and wisely is proceeding slowly towards that end. Throwing them into each other’s arms would take the wind out of the sails of the series.

The author has hinted that there may be further books (after #4) in this series, if she gets the word from the publisher. I can only hope that they give her the green light, as I would totally read as many as she can produce.