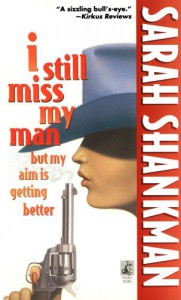 Tuesday, eleven-thirty, a bright spring morning .... Just off the breakfast shift at Sweet Willie's meat-and-three, Shelby Kay Tate rushes down an old-fashioned Nashville sidewalk with Thursday night playing itself out in her mind. It's songwriters' night at the Sutler, a chance to serve up her big, bluesy voice to a crowd hungry for new country songs. Shelby's picturing herself onstage, a girl from Star, Mississippi, belting one clear against the back wall, when a familiar head of golden hair brings her out of her reverie. She'd know Leroy Mabry's puny frame from a mile away - and the last time she'd seen it was in divorce court. Though she wonders what the devil he's up to, she's got better things to think about.

An eclectic mix of jealous women, scouting agents, and a big-name star ready for a big-time comeback make their own plans!

With this title, how could I resist this book? And it is highly appropriate that it is also the title of the country song that the main character, Shelby Kay Tate, is working on. She has come to Nashville to follow her passion, singing & song writing, having finally divorced her dead-beat husband Leroy.

When I first was getting going, I must confess that I was a bit worried that it was all going to be too cutesy. But once I gained some momentum, I got into the spirit of the book and was willing to go with the author’s plan. She is playing with stereotypes, both of the Nashville scene and those of what life in the Southern U.S. is like. As a Southerner herself, Shankman is obviously fondly making fun of her home and that affection shines throughout.

I loved how she kept introducing characters who all improbably are connected, creating a real tangle of yarn as all their threads cross during the course of the story. There is also a strong feminist vibe through the whole book, as both Shelby and several other women break free of bad or abusive relationships and are able to sing along, “I still miss my man, but my aim is getting better.”