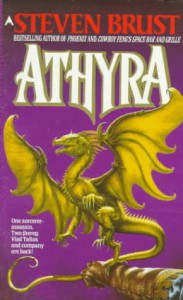 Vlad Taltos is very good at killing people. That, combined with two faithful companions and a talent for witchcraft, makes him an assassin par excellence. But lately his heart just hasn't been in his work, so he decides to retire. Unfortunately, old enemies have scores to settle with Vlad. So much for retirement!

Although I liked this story well enough, it is my least favourite of the Vlad Taltos books that I’ve read thus far. I think it’s because it’s not narrated by Vlad, but by a young Teckla man who befriends Vlad on one of his self-directed missions. I missed the cheeky, smart-ass remarks that we have come to expect from our Eastern (ex-)assassin friend.

As I say, the story isn’t bad, but it suffers from this change in point-of-view. Brust has made the young man ignorant--he’s smart enough, but he’s had relatively little education and no experience to cause him to question any of his culture’s world views. There’s limited interest in his learning about the outside world and how others perceive it and him, but it’s not riveting.

I imagine that Brust wanted to experiment with a new writing technique--writing the same thing over and over may appeal to your core audience, but I can see needing to try new things to keep yourself interested in an established character. My hope is that book 7 will revert to Vlad as the main voice.