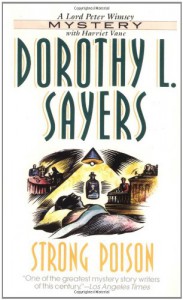 Can Lord Peter Wimsey prove that Harriet Vane is not guilty of murder--or find the real poisoner in time to save her from the gallows?

Impossible, it seems. The Crown's case is watertight. The police are adamant that the right person is on trial. The judge's summing-up is also clear. Harriet Vane is guilty of the killing her lover. And Harriet Vane shall hang.

But the jury disagrees.

Change is afoot in the world of Lord Peter Wimsey. People are asking Peter to stay the way he is and it is chilling his soul. Not only does he envision his own altered future, but he sees the societal changes taking place around him, and he knows that change is inevitable.

Enter Harriet Vane. She is an author in the mystery genre, she has lived with a male author without the benefit of matrimony, and she is on trial for that man’s murder. It is said that Harriet is an alter-ego for Dorothy L. Sayers herself. I have a hold on a biography of that wonderful woman at my public library and am eagerly awaiting my chance to investigate! Especially since Harriet proclaims,

”Philip wasn't the sort of man to make a friend of a woman. He wanted devotion. I gave him that. I did, you know. But I couldn't stand being made a fool of. I couldn’t stand being put on probation, like an office-boy, to see if I was good enough to be condescended to. I quite thought he was honest when he said he didn't believe in marriage -- and then it turned out that it was a test, to see whether my devotion was abject enough. Well, it wasn't. I didn't like having matrimony offered as a bad-conduct prize.”

Ms. Sayers writing is divine and methinks she was a force to be reckoned with!

Also shining brightly in this volume are Miss Climpson and Miss Murchison, part of Lord Wimsey’s army of unattached women, whose talents are being put to full use! Whether they are learning to pick locks or staging séances to uncover evidence, they take great pleasure in being underestimated by the stuffed-shirt men who stand in their way.

Sayers is recording the shift that is leveling the social classes, allowing Wimsey to pursue his authoress and his sister to snag her policeman, and the beginnings of the escape of Western society from Victorian values that continues to this day.