The Towers of the Sunset / L.E. Modesitt 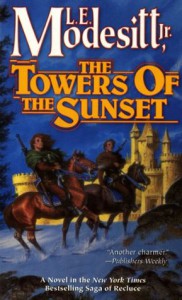 Tells the story of Creslin, son of a powerful military matriarch, who chooses exile rather than an arranged marriage. He sets out on a search for his true identity as a man, developing his magical talents through constant conflict with the enigmatic white wizards of Candar.

I really enjoyed the beginning of this book, with the male/female role reversal. The young man, Creslin, who is kept in seclusion to be pure for marriage, the reluctance to teach him fighting skills because he will have women to defend him, his major life role to be a consort to a powerful woman somewhere. And because he has insisted on learning to fight and to ski, we get a runaway groom instead of a runaway bride! I’ve read this particular pattern with a female lead character quite often and it was refreshing to see a male character get the same treatment.

Later in the book, there is some interesting exploration of the nature of man-woman relationships, the differences between the priorities of the sexes when it comes to love, perhaps? Not as spot-on for me as the beginning of the story, but still a long way from the fiction where only the man’s opinion matters.

Somewhat confusing sometimes was the alignment of the colour black with Order Magic and white with Chaos Magic. Kind of reversing the usual good/evil colour associations. Not that either form of magic is painted entirely good or evil—Creslin learns that he can certainly cause bad things to happen with his Order magic. It’s like the old saying about knives. It isn’t the knife that is good or bad, it’s the intention of the person wielding it.