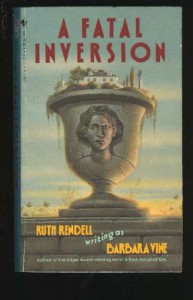 In the long, hot summer of 1976, a group of young people is camping in Wyvis Hall. Adam, Rufus, Shiva, Vivien and Zosie hardly ask why they are there or how they are to live; they scavenge, steal and sell the family heirlooms.

Ten years later, the bodies of a woman and child are discovered in the Hall's animal cemetery. Which woman? And whose child?

Probably not the best Barbara Vine/Ruth Rendell book to get started with. For me, it didn’t flow as well as I could have hoped. Plus, although I certainly don’t require likeable characters to keep me engaged, I have to care about who did what and why. I found all of the characters in this novel to be unpleasant (to say the least) and I couldn’t care much about how they ended up.

It was odd—gathering the details gradually and making assumptions about who the woman and the child found in the pet cemetery could be and how they got there. I’ve read books where I’ve known the perpetrator from the beginning, but still was intrigued by the story, but this book didn’t grab me the same way. It wasn’t until the very last pages that I found myself engaged. That’s a long time to wait.

I was reading AFI largely on my work coffee breaks. It helped to have no alternative reading available, as I found myself reluctant to pick up the book and yet anxious to get finished and move on to something more rewarding. Truly, cognitive dissonance.

Perhaps I was just in the wrong mood for this mystery—I’m a bit off of mysteries right now, I think perhaps I’ve read a few too many of them in the last while. But it was one of the books that I chose for my 2018 reading list and so I forged ahead with it. Your mileage may vary.