Made to Kill / Adam Christopher 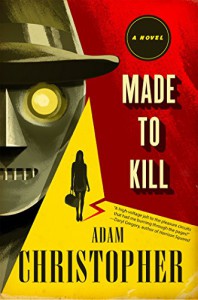 Raymond Electromatic is good at his job, as good as he ever was at being a true Private Investigator, the lone employee of the Electromatic Detective Agency--except for Ada, office gal and super-computer, the constant voice in Ray's inner ear. Ray might have taken up a new line of work, but money is money, after all, and he was programmed to make a profit. Besides, with his twenty-four-hour memory-tape limits, he sure can keep a secret.

When a familiar-looking woman arrives at the agency wanting to hire Ray to find a missing movie star, he's inclined to tell her to take a hike. But she had the cold hard cash, a demand for total anonymity, and tendency to vanish on her own.

Plunged into a glittering world of fame, fortune, and secrecy, Ray uncovers a sinister plot that goes much deeper than the silver screen--and this robot is at the wrong place, at the wrong time.

I read this to fill the Modern Noir square of my 2018 Halloween Bingo card.

I became kinda fond of Raymond Electromatic by the end of this novel. He’s a robot with a heart for gold and limited short term memory. The author made it clear that he was a great admirer of Raymond Chandler and the noir detective genre, but that he was trying to write “Raymond Chandler’s lost science fiction novel.” Unfortunately for Mr. Christopher, it is extremely difficult to write as beautifully as Raymond Chandler. However, I can tell that he had a good time trying.

Things get a bit complex and confusing about 2/3 of the way through, but everything sorts itself out in the end. There are more books in the series if you’re a fan, but I think I know Mr. Electromatic well enough at this juncture. A fun Halloween read.