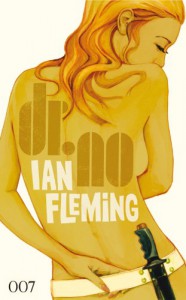 James Bond travels to the Caribbean to investigate the mysterious disappearance of a secret service team. As he uncovers the astonishing truth about strange energy waves that are interfering with U.S. missile launches, he must battle deadly assassins, sexy femmes fatales, and even a poisonous tarantula. The search takes him to an exotic tropical island, where he meets a beautiful nature girl and discovers the hideout of Doctor No, a six-foot-six madman with a mania for torture, a lust to kill, and a fantastic secret to hide.

Probably the silliest Bond that I have read so far, with Dr. No being a caricature of a villain, very over-the-top! Fleming must have read some of Sax Rohmer’s Dr. Fu Manchu, another super-villain of the early 20th century (and a character who drew protests from the Chinese embassy and Japanese-Americans for the overt racism).

However, I’ve awarded half a star more than I did for the other Bond novels that I’ve read so far, both for the depiction of Jamaica (a place that Fleming obviously loved) and for the accurate ornithological information. When Fleming describes Jamaica, he does so lovingly—his time spent at his home there, Goldeneye, must have been some of the most peaceful and productive time in his life. Quarrel, Bond’s partner in both this novel and Live and Let Die was based on a Jamaican fisherman who took Fleming shark-fishing.

From reading Andrew Lycett’s biography of Fleming, I know that Fleming was taken on a field trip to a flamingo colony in the Bahamas. This must have started his creative process, beginning with the fictional island of Crab Key, which is also a haven for birds until the advent of the fiendish Dr. No, whose guano-harvesting business is a front for espionage activity. Fleming certainly gets the mangrove habitat and the guano business details right, probably as a result of his travel with two experts on this expedition. Small islands are indeed a haven for colonies of sea birds and their guano has been exploited for fertilizer since the 1800s at least.

I have to also acknowledge Fleming for being willing to change things up on the advice of experts—Bond gets new guns in this story, on the advice of a Bond enthusiast who was also a firearms expert (Geoffrey Boothroyd). As a result, the Armourer in this novel acquires the name Major Boothroyd. Fleming, however, can’t resist one last snark on the matter at the end when Bond cables M: “REGRET MUST AGAIN REQUEST SICK LEAVE STOP SURGEONS REPORT FOLLOWS STOP KINDLY INFORM ARMOURER SMITH AND WESSON INEFFECTIVE AGAINST FLAME-THROWER ENDIT.”

I have ranted about other books where the author has included inaccurate bird information (Dragonfly in Amber, for example), so I will even forgive M for dismissing one of my favourite birds, the Whooping Crane, because of the birdy accuracy of this novel.