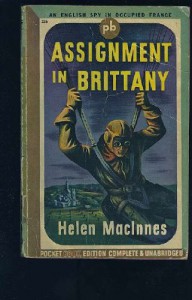 Now he was Bertrand Corlay, with 26 yrs of another man's life reduced to headings and sub-headings in his memory. He looked down at the faded uniform which had been Corlay's, feld once more for the papers in the inside pocket.

All set. He patted the pocked of the tunic wich his earth-stained hand, and smiled grimly. From now on, he would not only have to speak, but think, in French ...

How is it that I have never run into Helen MacInnes before this? If I ever do another reading project featuring espionage literature, I will definitely be adding more of her work to the reading list!

The premise is an unlikely one—after a WWII battle, someone notices an injured Breton man who looks just like an active English spy. Not only does this spy Hearne uncannily resemble the disabled man, but he also speaks Breton (a pretty obscure Celtic language) and has studied the culture. He spends a great deal of time interviewing the Breton fellow, learning as many details of his life in his small village as possible and then is parachuted in, to report back on Nazi activity in the area.

I have to hand it to MacInnes, she handles this rather unlikely scenario so skillfully that I soon gave up my reservations and plunged wholeheartedly into the story. It’s a good, tense plot with excellent pacing. First Hearne must deal with “his” closest family and fiancée while passing off his differentness as shell shock. But it turns out that he has exchanged places with a pretty unlikeable guy and his own honourable behaviour causes others to question his real identity. Will they unmask Hearne or will they help him with his mission?

The very first thing I thought of when starting this novel was Tana French’s second Dublin Murder Squad book, The Likeness, where a young detective, Cassie Maddox, is called to a murder scene. The victim is Cassie’s double, using a fake identity developed by Cassie when she was undercover. Of course, Cassie gets sent into the life of the dead girl to see what she can discover. French also was able to carry off that most unlikely scenario, in my opinion, through the sheer brilliance of her writing. I’d really like to think that she maybe got her idea from Helen MacInnes.

I love finding great writers and finding links between the works of authors that I enjoy. This book was a win in both of those columns.