From Russia With Love / Ian Fleming 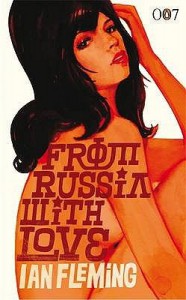 Every major foreign government has a file on James Bond, British secret agent. Now, Russia's deadly SMERSH organization has targeted him for elimination - they have the perfect bait in the irresistible Tatiana Romanova. Her mission is to lure Bond to Istanbul and seduce him while her superiors handle the rest.

”At 7:30 on the morning of Thursday, August 12th, Bond awoke in his comfortable flat in the plane-tree’d square off the King’s Road and was disgusted to find that he was thoroughly bored with the prospect of the day ahead.”

Having just recently finished Lycett’s biography of Ian Fleming, the above passage sent me flipping through my notes about that author, where I found this quotation that I had noted:

”After his death his widow Ann put it in much the same way. “You must realize that Ian was entirely egocentric. His aim as long as I knew him was to avoid the dull, the humdrum the everyday demands of life that afflict ordinary people. He stood for working out a way of life that was not boring and he went where that led him. It ended with Bond.”

The conjunction of the two books made me smile. I’ve also recently finished reading Somerset Maugham’s spy novel, Ashenden. It also features a beautiful Russian woman—the protagonist spends a week with her to confirm their compatibility and instead finds her boring and demanding.

”But Ashenden saw himself eating scrambled eggs every morning for the rest of his life. When he had put her in a cab, he called another for himself, went to the Cunard office, and took a berth on the first ship that was going to America. No immigrant, eager for freedom and a new life, ever looked upon the statue of Liberty with more heartfelt thankfulness that did Ashenden, when on that bright and sunny morning his ship steamed into the harbour of New York.”

A wildly different response to the care and attention that Bond expends on Tatiana Romanova.

And wow, the first cliff hanger ending of the Bond series, showing how uncertain Fleming was about whether he would continue to write these adventures. Partly because of the criticism of conservative reviewers and the sniping of his wife’s circle of friends (which included Maugham). Ian became quite testy about his wife’s friends for this very reason. I think he would be pleased to know that Bond is still “a thing” even now in the 21st century.