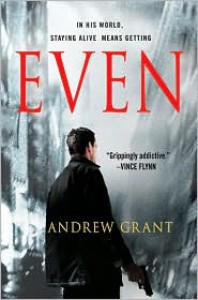 David Trevellyan is a Royal Navy intelligence operative who usually works undercover, sometimes with the approval of his masters—and sometimes not. On a seemingly normal evening, he takes a lonely late-night walk between a restaurant and his New York City hotel. A familiar huddled shape in the mouth of an alley catches his eye—a homeless man has been shot to death. Trevellyan steps forward…and a cop car arrives. A split second too late, Trevellyan realizes he’s been set up.

But Trevellyan isn’t worried. He’s a hard man from the shadowy world of Royal Navy Intelligence. He’s been in and out of trouble a thousand times before. But the NYPD quickly hands the problem to the FBI. Trevellyan is sucked deeper into the system. And the British Consulate tells him: You’re on your own now, mate.

With no idea who’s a friend and who’s a foe, he penetrates deep into a huge international conspiracy. The price of failure will be death, and the reward for success will be redemption, both for himself and the huddled corpse from the alley. The motivation will be his cherished life-long belief: You don’t get mad—you get EVEN.

It’s nice when two different reading plans come together. I’m trying to read at least one book by each of the special guests coming to the When Words Collide conference in Calgary in August and I’m spending my summer concentrating on Spy fiction. So I was delighted to find out that Andrew Grant has written a spy trilogy.

If you are a fan of fantasy spy thrillers like The Bourne Identity or Ian Fleming’s fiction, I think you may also enjoy Grant’s adventures of David Trevellyan. If you lean more towards the John Le Carré or Len Deighton style, you may find this tale a bit ridiculous (as I did). Notably, this author is the younger brother of writer Lee Child of Jack Reacher fame (and he’s probably sick and tired of people pointing that out). Several years ago, my real-life book club read a Jack Reacher novel during our Year of Reading Fluff. We hooted with laughter, speculating about Reacher wearing his underwear inside out or backwards to make it last longer without a wash and were amused by the general unreality of his circumstances. In that regard, it is obvious that Grant and Child share DNA—you need to be expert at suspending disbelief to get into this one!

My biggest hurdle was the “evil genius” Lesley (a Bond type evil villain if there ever was one). This woman ran a supposedly intricate empire and kept her minions (all men) in line by threatening castration. In fact David Trevellyan actually witnesses one of these events about halfway through the book. Now, I don’t know about you, but if I was a guy I wouldn’t be working for someone who punished her employees this way. I’m thinking she would need an all-female staff, as men would be gone as soon as the possibility was mentioned.

So, this is spy-fiction lite, as much fantasy as espionage. Lots of action, lots of violence, not much relation to reality. Dick lit, as opposed to chick lit. I will be very interested to hear Mr. Grant’s thoughts at the conference in August.