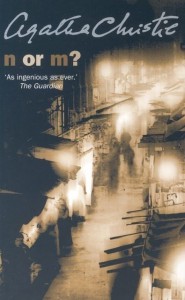 Then her lips set grimly.  There had been an eyelash in the fold of the paper this morning.  The eyelash was not there now.

She went to the washstand.  There was a little bottle labelled innocently: "Grey powder" with a dose.

Adroitly Tuppence dusted a little of the powder on to the letter and on to the surface of the glassy japanned enamel of the box.

There were no fingerprints on either of them.

Again Tuppence nodded her head with a certain grim satisfaction.

For there should have been fingerprints--her own.

Originally published in 1941.  Very similar to They Came to Baghdad. And also to Casino Royale by Fleming.