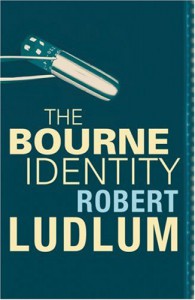 His memory is a blank. His bullet-ridden body was fished from the Mediterranean Sea. His face has been altered by plastic surgery. A frame of microfilm has been surgically implanted in his hip. Even his name is a mystery. Marked for death, he is racing for survival through a bizarre world of murderous conspirators -- led by Carlos, the world's most dangerous assassin. Who is Jason Bourne? The answer may kill him.

Perhaps I came into this novel expecting a bit too much—I’ve never seen the movies, only advertising for them, so I didn’t go in completely blind to the story, but about as close as you can get in our society. I can certainly see that this would make a great shoot-‘em-up, car-chase intense movie. I really can’t say that I cared whether Bourne got his memory back or who he actually was. I would have been much more interested in more exploration of nature of the memory loss rather than all the frantic chasing around!

Kudos to him for his good taste in women, however. I was amused to find out that she was Canadian, from my city. It was also revealing that, although she is a very capable, knowledgeable economist in her own right, she is still often referred to as a ‘girl.’ Oh, I do not miss the 1980s!

I did very much like the book’s ending, but for me it is the perfect ending. I won’t ruin it by continuing on with the rest of the trilogy.