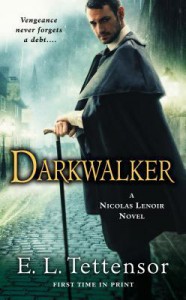 He used to be the best detective on the job. Until he became the hunted...

Once a legendary police inspector, Nicolas Lenoir is now a disillusioned and broken man who spends his days going through the motions and his evenings drinking away the nightmares of his past. Ten years ago, Lenoir barely escaped the grasp of the Darkwalker, a vengeful spirit who demands a terrible toll on those who have offended the dead. But the Darkwalker does not give up on his prey so easily, and Lenoir has always known his debt would come due one day.

When Lenoir is assigned to a disturbing new case, he treats the job with his usual apathy—until his best informant, a street savvy orphan, is kidnapped. Desperate to find his young friend before the worst befalls him, Lenoir will do anything catch the monster responsible for the crimes, even if it means walking willingly into the arms of his own doom...

I didn’t connect with this character as much as I did the characters in the author’s other series (The Bloodbound, Erin Lindsey), but I still enjoyed the reading experience. I’m not gonna lie, I found many of the plot points to be a bit predictable, but the writing was good enough that I was willing to forgive that. I do like a paranormal detective story, even if Nicolas Lenoir is a moody, often drunken jerk. There’s a bit too much lingering (without details) on the big bad awful thing that happened in his past that left him in this detached state.

He may initially remind the reader of Sherlock Holmes, but there are significant differences. His alcohol dependence resembles Holmes’ drug habit, but the reasons behind them are different. Holmes indulges occasionally when he’s bored, Lenoir drinks every night to forget the dark event in his past. Holmes, for all his disdain for regular people, is pretty honest & upright. Lenoir is open to bribery and willing to slack on investigations that he doesn’t consider particularly important. With his snarly, detached demeanour, Lenoir is certainly lacking a sidekick like Watson, although he has Sergeant Kody waiting in the wings to fill the position. In this volume, Lenoir has Zach, a wily orphan boy, who stands in for all the Baker Street Irregulars, to help him with his inquiries.

The setting is Victorian without being set in London. This world is obviously not ours and we learn the differences as the story progresses. Magic is very much a thing in this reality and has to be taken into account. The Adali people are very Romany-like and provide an exotic source of tension.

This author will be at the August conference that I’ll be attending. I think I’ll have read all of her books by then! She has attended before and I enjoyed her perspectives on fiction and writing, so I’m looking forward to more of the same.