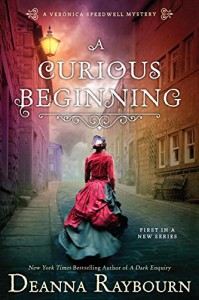 London, 1887. Veronica wields her butterfly net and a sharpened hatpin with equal aplomb. She thwarts her own abduction with the help of an enigmatic German baron with ties to her mysterious past. Promising to reveal in time what he knows of the plot against her, the baron offers her temporary sanctuary in the care of his friend Stoker—a reclusive natural historian as intriguing as he is bad-tempered. But the baron is murdered before he can reveal her secrets. Suddenly Veronica and Stoker must flee from an elusive assailant, wary partners in search of the villainous truth.

I can hardly wait to meet this author in August at the When Words Collide conference here in my city! I really enjoyed this novel and have already requested book two from my public library.

I appreciated the main character, Veronica Speedwell, a great deal. It’s very much the trend now, to rewrite female characters during the Victorian era, giving them bigger ideas and more autonomy. I think of The Lie Tree and Jane Steele, both of which I have also enjoyed a great deal. I’m also reminded of the Amelia Peacock character in Elizabeth Peters’ series, about a feminist female archaeologist in the Victorian era (this series began in 1975, so it could probably be considered the grandmother to this current batch of novels). Veronica is determined to remain single and support herself through providing natural history specimens to collectors. She is also enamoured with foreign men, enjoying dalliances while abroad to collect those specimens.

Stoker is a very attractive love interest for Miss Speedwell, despite the fact that she has decided against marriage and has rules about not getting involved with Englishmen. (Actually, her pursuit of sexual liaisons while abroad seemed the most unlikely part of this novel, for me, there being no reliable birth control during that period). He is bad tempered, less than cleanly, and often surprised by Veronica’s sass. He also sports tattoos that make him a little too 21st century to be entirely believable, but I’m willing to give the benefit of the doubt because I enjoy his character. Plus, he has great potential to clean up well.

There are plenty of twists and turns in the plot, but I don’t think I am alone in thinking that the very slow-burn romance between Veronica and Stoker is the best aspect of the book.