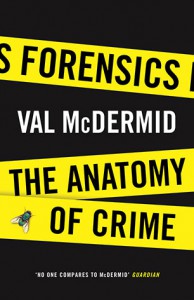 The dead talk—to the right listener. They can tell us all about themselves: where they came from, how they lived, how they died, and, of course, who killed them. Forensic scientists can unlock the mysteries of the past and help serve justice using the messages left by a corpse, a crime scene, or the faintest of human traces. Forensics draws on interviews with some of these top-level professionals, ground-breaking research, and McDermid’s own original interviews and firsthand experience on scene with top forensic scientists.

Along the way, McDermid discovers how maggots collected from a corpse can help determine one’s time of death; how a DNA trace a millionth the size of a grain of salt can be used to convict a killer; and how a team of young Argentine scientists led by a maverick American anthropologist were able to uncover the victims of a genocide. It’s a journey that will take McDermid to war zones, fire scenes, and autopsy suites, and bring her into contact with both extraordinary bravery and wickedness, as she traces the history of forensics from its earliest beginnings to the cutting-edge science of the modern day.

I cancelled my cable TV years ago because I was making myself paranoid, watching way too many true crime stories. Plus, I had an unhealthy addiction to the show “Criminal Minds.” I’m pleased to report that I’m a much calmer person now that I’m not being inundated with this sort of entertainment. However, that former obsession with crime shows means that most of what McDermid writes in this non-fiction volume was not new to me, hence only a three star rating. If you are new to the world of forensic investigation, I think this would an excellent introduction.

McDermid has obviously had to research this field to make her mystery novels ring true. And what better way to make that research pay off again but to write a non-fiction book about the subject! It was good to get a British POV on these matters. Here in Canada, we tend to be bombarded with American material, both in books and television, so many of the case studies were new to me.

The author goes into just enough detail to make things comprehensible, without overloading the reader. The explanations are clear and easy to understand. I think it would make a good reference for jurors who are responsible for making decisions based on these methods.