The Magic of Recluce / L.E. Modesitt 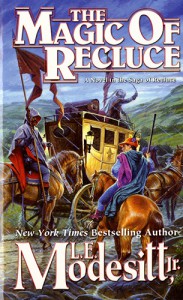 Young Lerris is dissatisfied with his life and trade, and yearns to find a place in the world better suited to his skills and temperament. But in Recluce a change in circumstances means taking one of two options: permanent exile from Recluce or the dangergeld, a complex, rule-laden wanderjahr in the lands beyond Recluce, with the aim of learning how the world works and what his place in it might be. Many do not survive. Lerris chooses dangergeld. When Lerris is sent into intensive training for his quest, it soon becomes clear that he has a natural talent for magic. And he will need magic in the lands beyond, where the power of the Chaos Wizards reigns unchecked. Though it goes against all of his instincts, Lerris must learn to use his powers in an orderly way before his wanderjahr, or fall prey to Chaos.

I liked this book well enough, but it really didn’t distinguish itself. Young Lerris gets sent off to do what is called dangergeld because he is bored with his perfect, utopian life. As per usual in this kind of story, he discovers that he has talents he never suspected, that his parents aren’t who he thought they were, and that non-utopian life can be rather difficult. You know, the usual in these fantasy epics. (See The Belgariad by David Eddings, The Riftwar Saga by Raymond Feist, or Memory, Sorrow, and Thorn by Tad Williams or even the King Arthur legend).

There is some attempt made to produce meaningful female characters, but unfortunately they are only there as foils and props for Lerris. When he needs someone to bring him down a peg or two, there’s Tamra. When he needs a romantic interest, there’s Krystal. But they retreat into obscurity when they are not needed for some plot point. It’s nice that they’re intelligent and talented, but they don’t get to shine, at least in this first book. They don’t even really talk to one another, except to discuss Lerris a little bit.

I’ve cheated a bit and peeked at the Wikipedia entry for this series—if that’s accurate, I have some hope for the series. Two technologically advanced cultures are marooned on this world and have very different world views. That reminds me of Julian May’s Saga of Pliocene Exile enough to pique my curiosity and send me looking for at least the second book in the series.

Book number 282 in my Science Fiction and Fantasy Reading Project.