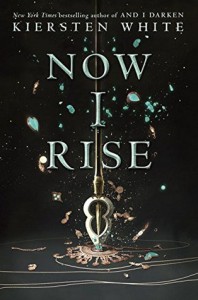 She has no allies. No throne. All she has is what she’s always had: herself.

After failing to secure the Wallachian throne, Lada Dracul is out to punish anyone who dares to cross her blood-strewn path. Filled with a white-hot rage, she storms the countryside with her men, accompanied by her childhood friend Bogdan, terrorizing the land. But brute force isn’t getting Lada what she wants. And thinking of Mehmed brings little comfort to her thorny heart. There’s no time to wonder whether he still thinks about her, even loves her. She left him before he could leave her.

What Lada needs is her younger brother Radu’s subtlety and skill. But Mehmed has sent him to Constantinople—and it’s no diplomatic mission. Mehmed wants control of the city, and Radu has earned an unwanted place as a double-crossing spy behind enemy lines. Radu longs for his sister’s fierce confidence—but for the first time in his life, he rejects her unexpected plea for help. Torn between loyalties to faith, to the Ottomans, and to Mehmed, he knows he owes Lada nothing. If she dies, he could never forgive himself—but if he fails in Constantinople, will Mehmed ever forgive him?

As nations fall around them, the Dracul siblings must decide: what will they sacrifice to fulfill their destinies? Empires will topple, thrones will be won…and souls will be lost.

I think it was a genius choice to feminize the Dracula historical character! I love Lada Dracul and her hard, violent little heart! It gives an interesting torque to the facts and makes a fascinating tale even more engaging.

This is the second installment in a trilogy, and I’ve really enjoyed them both. The first book (And I Darken) is the April book for my real-life book club and I’ve chosen to read the second book rather than re-read the first. I’m so glad that I’ve continued on!

For those of you who are really interested in the time period and have the fortitude to withstand a lot of torture and impalings, I would also recommend Vlad: The Last Confession by C.C. Humphreys. It is an exceptional rendition of the historical Dracula story.