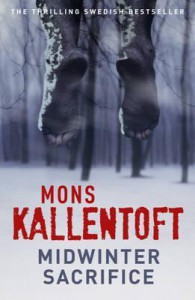 The snow covered all the tracks, as the killer knew it would. But it couldn't hide the victim, the man who now hung naked from a lonely tree on a frozen plain.

Malin Fors is first on the scene. A thirty-one-year-old single mother, Malin is the most talented and ambitious detective on the Linkoping police force, but also the most unpredictable. She must lead the investigation while keeping her fractured life on the rails.

No one knows the identity of the dead man. Or perhaps no one ever wanted to know. When all the voices of the investigation have fallen silent, Malin can rely only on herself and her own instincts. And as she follows in the frigid wake of the killer, Malin begins to discover just how far the people in this small town are willing to go to keep their secrets buried.

Probably actually a 3.5 star book for me. It’s getting much harder to fool me, now that I’ve read a fair number of Nordic mysteries and I really treasure the books that do manage to pull the wool over my eyes. Midwinter Sacrifice managed to keep me guessing until the last chapters, when it just kind of stuttered to the end.

I liked Malin Fors, the female detective main character. I could appreciate her ambition and determination to solve a case. There was a little too much emphasis on her “feminine intuition” for me, since I think both men & women use their intuition and that police officers especially rely on it, no matter which gender they are.

I also like Malin’s daughter, Tove. Unlike so many detectives in mystery fiction, Malin lives with her daughter and tries to be a decent mother. Malin’s struggles to decide what is reasonable as a parent makes her very real to me.

Although I probably won’t hurry on to the next book, I can certainly imagine that I will get to it eventually to see what the Swedish detective investigates next.