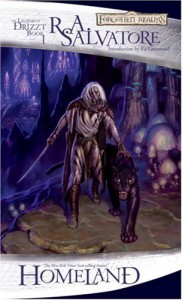 In exotic Menzoberranzan, the vast city of the drow is home to Icewind Dale prince Drizzt Do'Urden, who grows to maturity in the vile world of his dark elf kin. Possessing honor beyond the scope of his unprincipled society, can he live in world that rejects integrity?

This novel relates the first installment of Drizzt Do’Urden’s back story, namely his birth into Drow Elf society. As I have come to expect from Salvatore, it is melodramatic in the extreme. Drow society is over-the-top evil, bad in every way. Despite the fact that Drow females don’t produce many offspring comparative to their extra-long lifespans, Drizzt was conceived as a sacrifice to the horrible spider goddess Lloth and he is spared this fate when one of his brothers murders the other. Lloth’s supremacy as spider goddess has yielded a matriarchal society, where women are dominant and, like female spiders, are quite willing to dispense with a male once his purpose has been served. There is nothing resembling honour in Drow circles—not even between family members. So Drizzt’s violet eyes and moral sense set him apart from his own society.

We also learn how he became involved with his side-kick, Guenhwyvar the black panther and how he became the fighting machine that we are familiar with from previous books.

I can see where in a gaming situation, OTT characters such as these would be fun to play. It’s often more fun to be a villain than a hero because you get to do the awful things.

Book number 273 in my Science Fiction and Fantasy reading project.