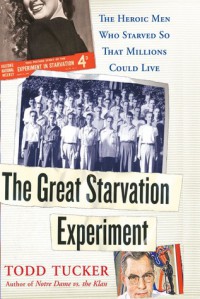 Near the end of World War II, thirty-six conscientious objectors volunteered to be systematically starved for renowned scientist Ancel Keys’s study at the University of Minnesota in the basement of Memorial Stadium. Aimed to benefit relief efforts in war-ravaged Europe and Asia, the study sought the best way to rehabilitate starving citizens. Tucker captures a lost moment in American history—a time when stanch idealism and a deep willingness to sacrifice trumped even basic human needs.

This was a fascinating read in that can’t-look-away-from-the-car-accident kind of way.  If you’ve read any books about dieting, you’ve probably heard about this study.  Indeed, if you’ve ever been on a restrictive, low-calorie diet, you know how your world begins to revolve around food and you have a hard time giving a damn about anything else.  Now I know exactly how normal this is!

It was an especially interesting book when read shortly after Night by Elie Wiesel and Man’s Search for Meaning by Viktor Frankl.  Both men describe the centrality of food in their lives during their incarceration in the prison camps.  They talk about not having the energy or the brain power to spare to help others, even family members.

Ancel Keys’ experiment would certainly never be green-lighted today.  Despite the fact that his subjects were volunteers (conscientious objectors who chose the experiment rather than military service) and they knew the experience would be difficult, they had no idea how grueling it would be.  It didn’t take long for their sex drives to disappear (Frankl mentions this in the concentration camps, that it actually kept the experience from being worse because no prisoners had the drive to victimize anyone sexually).  Some of the Keys’ guinea pigs (as they were known) continued to go to classes and listen to lectures, but it rapidly became too hard to pay attention.  Keys advised guest lecturers to mention food, which would rivet the men’s attention, at least momentarily.  Meals became the focus of their days and they would become angry & abusive if service was the slightest bit late or if the food was not piping hot (they also felt cold all the time, as their bodies tried to save energy).  A group of men who started out happy, healthy, and social became touchy, angry, and prone to sudden outbursts.  They performed strange rituals with their food—sometimes stirring it all together into a pile for instance.

The supposed object of the experiment was to find the best way to get people back to normal after periods of extreme hunger.  It turns out that the conclusion was to feed them!  The guinea pigs ate at least 5000 calories per day when they were permitted to eat freely again and one man distinguished himself by eating over 11,000 calories in one day!  No supplements made any meaningful difference—just food.  That’s the saddest part really, that these men suffered through the experiment and so little was actually learned as a result.